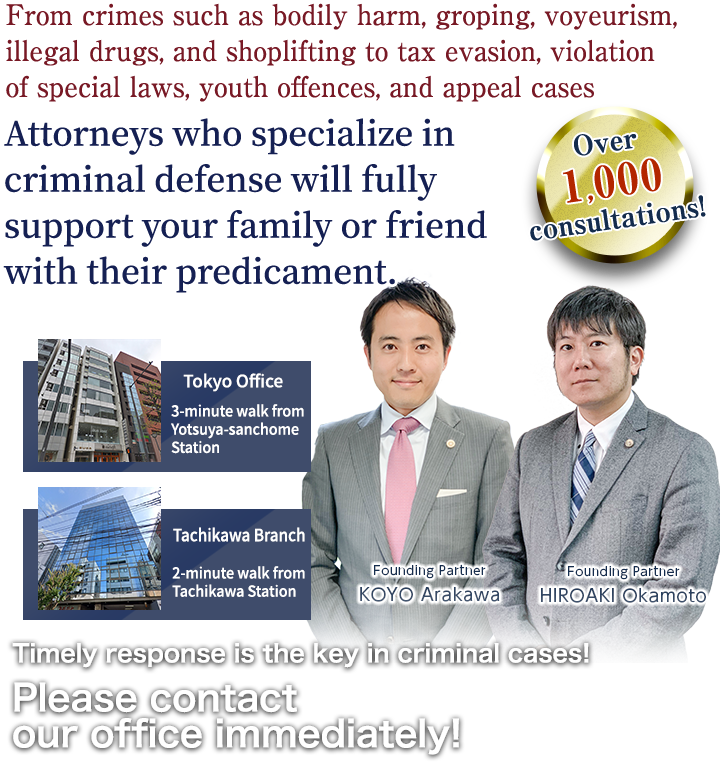 Message from the Founding Partner 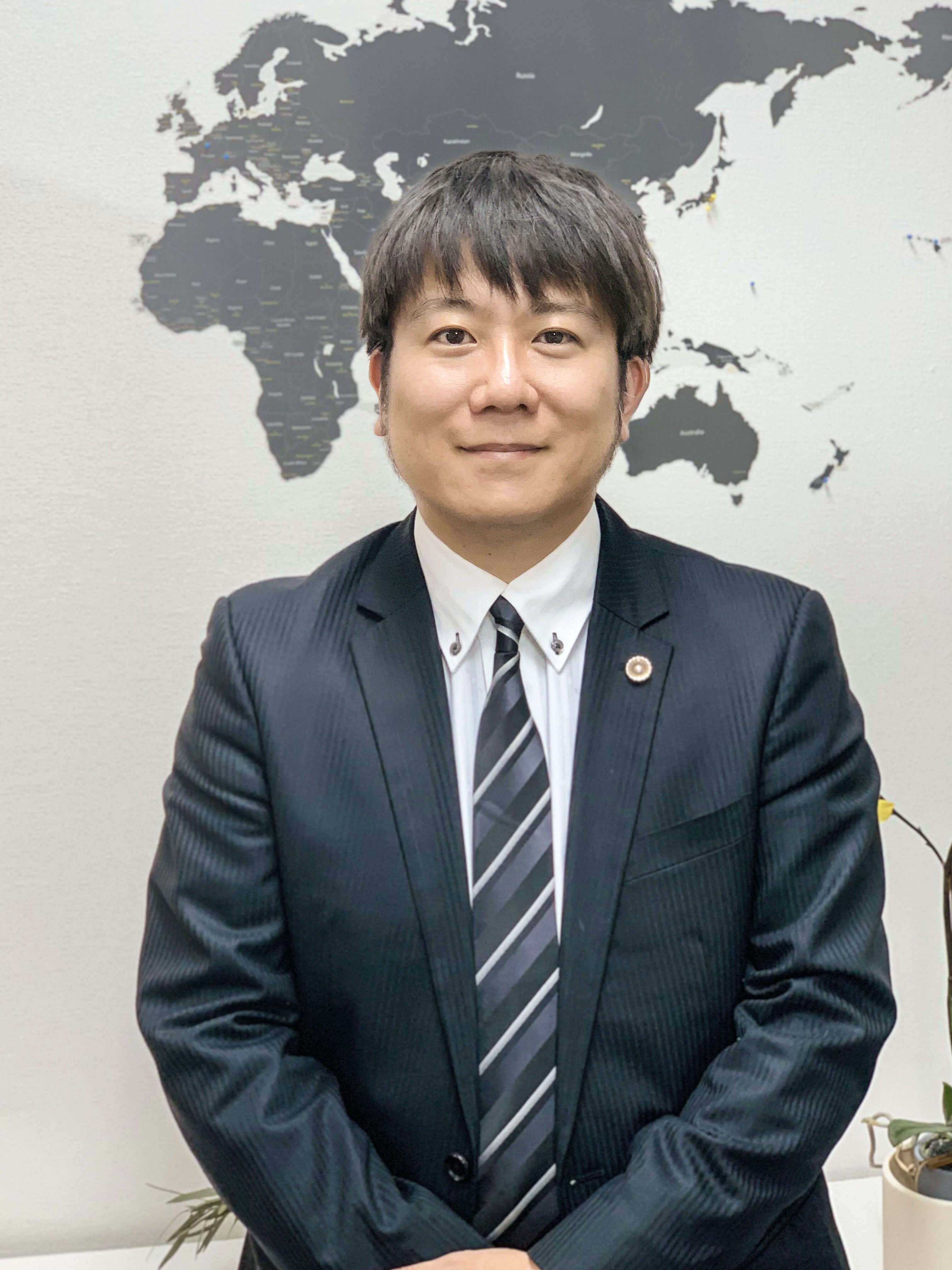 Japan has unique criminal procedures that are different from any other country. The most noteworthy aspect of all is that a suspect can be kept in physical restraint for an extended period – up to 23 days per case – until he/she is prosecuted. Therefore, if law enforcement agencies are conducting investigations for multiple cases, the suspect could be restrained for a period of 23 days multiplied by the number of cases under investigation.
Let’s look at a specific example and assume that there is a suspect who is under this 23-day restraint for possessing cocaine. If components of cocaine are detected in his body, investigative agencies can lawfully keep him in custody for additional 23 days as he actually used cocaine. In this case, this suspect is to be confined in a detention facility for over a month until prosecution.
In the cases of foreign suspects, they are first of all restricted in a foreign detention facility where communication is conducted in a language they do not understand. On top of that, they are not allowed to see their family and they are continuously interrogated. Their agony is simply unimaginable. To get out of these situations, sadly, many suspects do make a false confession. Professional defense by an experienced attorney is essential to save suspects in these circumstances. I started my career as an associate of a law firm specializing in international criminal defense, representing a great number of foreign suspects. Through my experience, I have become convinced of significant issues surrounding Japanese criminal procedures, which has brought me to actively involve myself in endeavors to change the current system.
This change cannot be achieved, unfortunately, with those who are currently under arrest or detention. However, based on the premise of the current criminal prosecution system, I have been fervently defending suspects so that they can be released from the detention facility without penalty as soon as possible. In particular, cases involving drugs may result in imprisonment of close to 10 years once prosecuted. On previous occasions, I have successfully avoided this risk and won a decision not to indict the suspect.
In Japan, not many attorneys are both familiar with criminal cases and able to directly communicate in English at the same time. If your family member is arrested or is involved in a criminal case in Japan, and if you are looking for a counsel to handle the case, we would like to hear from you. We are sure to provide you with the help you need and beyond.

Criminal cases include different stages as outlined below, where the suspect is:

In each of these stages, professional support by an attorney plays a critical role.
You can never be too late to appoint one. If you are in trouble with a criminal case at any given time, please do not hesitate to contact us.
To win the best results, immediate and appropriate defense is crucial. If you are not yet at the point where an attorney’s support is required, we will advise you accordingly, so leave that worry with us.
We look forward to hearing from you.

Procedures between arrest and prosecution 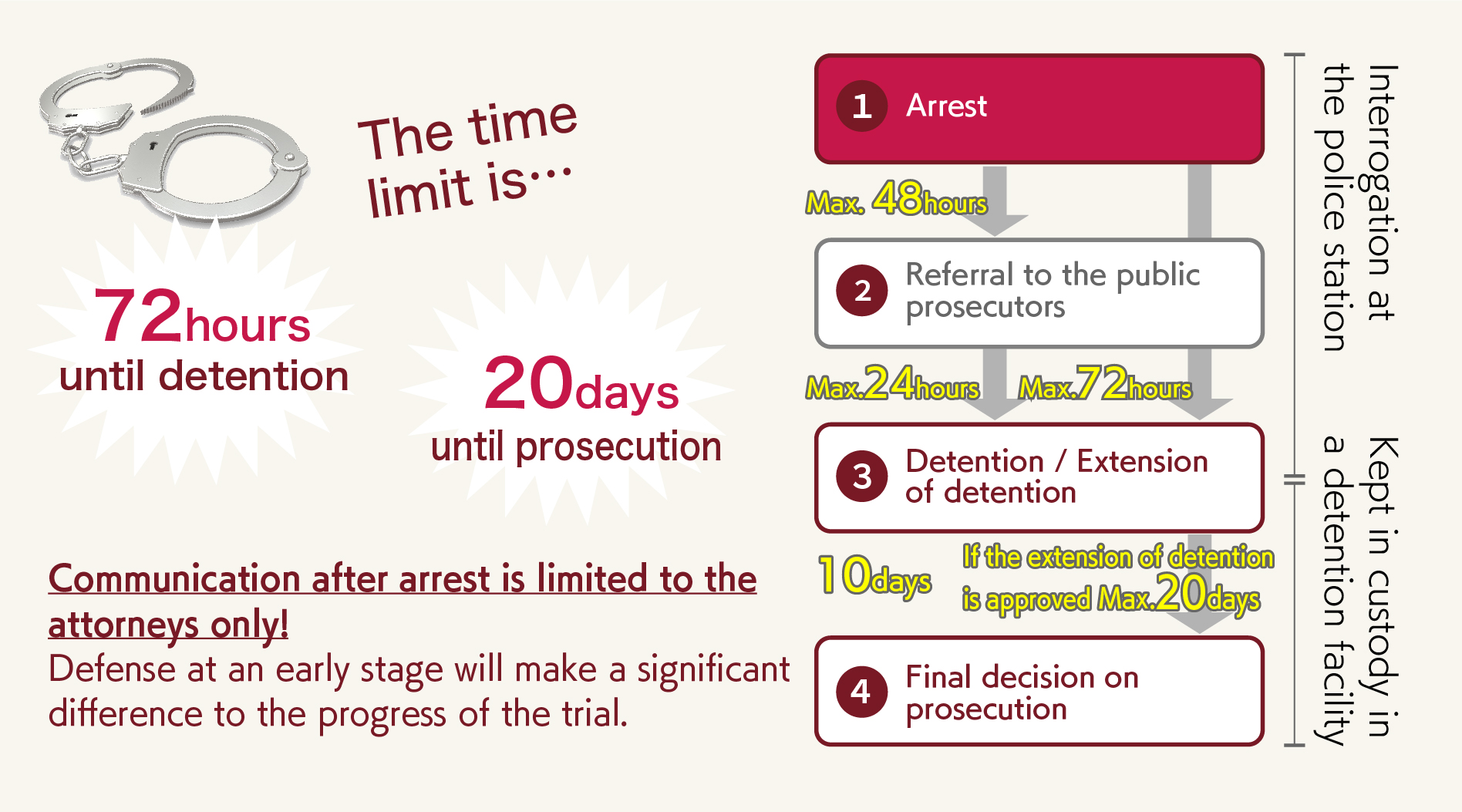 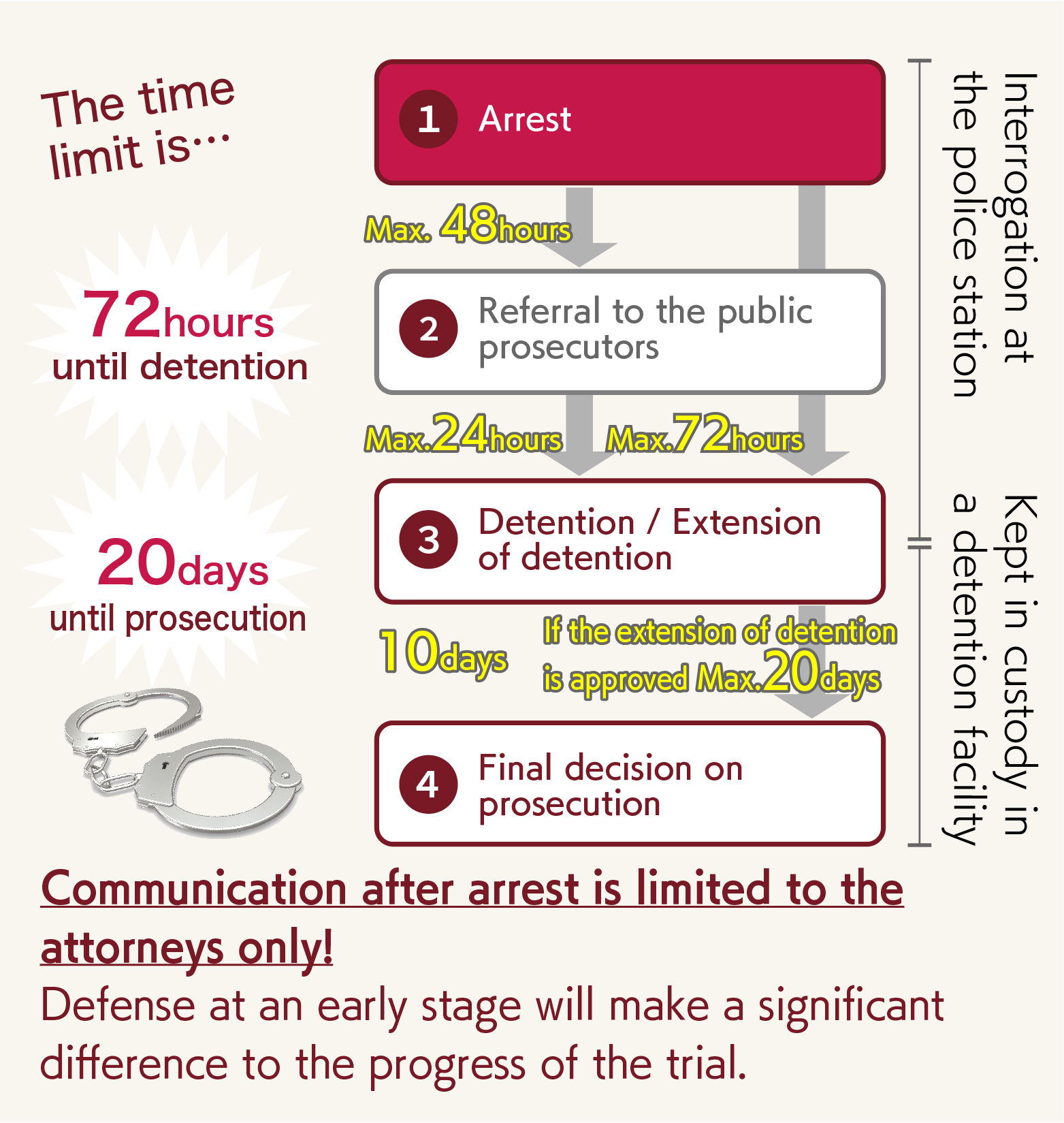 Should the person be arrested, the police will move on to the next step, which is to refer the case to the public prosecutor’s office within 48 hours of the arrest. During this period, the suspect is highly unlikely to be released; therefore, he/she will be detained within the police station for two days.
Naturally, the first important step is to avoid an arrest.

2. Referral to the public prosecutors

What an attorney can do:
At this stage, an attorney aims at preventing the approval of a detention request.

What an attorney can do:
An attorney defends the suspect to dismiss the detention request.

Upon receipt of the detention request from a public prosecutor, the judge will decide whether it is approved or dismissed. If the request is dismissed, the suspect will be released on the same day, making this the second opportunity for release.
At this stage, we must approach the judge effectively.
We will prepare documentation to submit to the judge which records essential evidence to release the suspect, so that the prosecutors’ claims will not be accepted.
Even if the detention request is approved, we will continue to work on shortening the term of the detention.

What an attorney can do:
An attorney focuses on the avoidance of indictment.

Public prosecutors decide whether to prosecute the suspect or not while he or she is in custody.
In order to clear a false accusation or to request the lightest punishment possible, a counsel needs to actively approach public prosecutors before the detention period ends.
The style of defense can vary from exercising the right to silence to actively pleading the case, which needs to be determined based on an attorney’s advanced expertise.
Over 90% of criminal trials in Japan result in conviction. Considering this extremely high conviction rate, a trial should be avoided and an effective defense is essential at this stage. 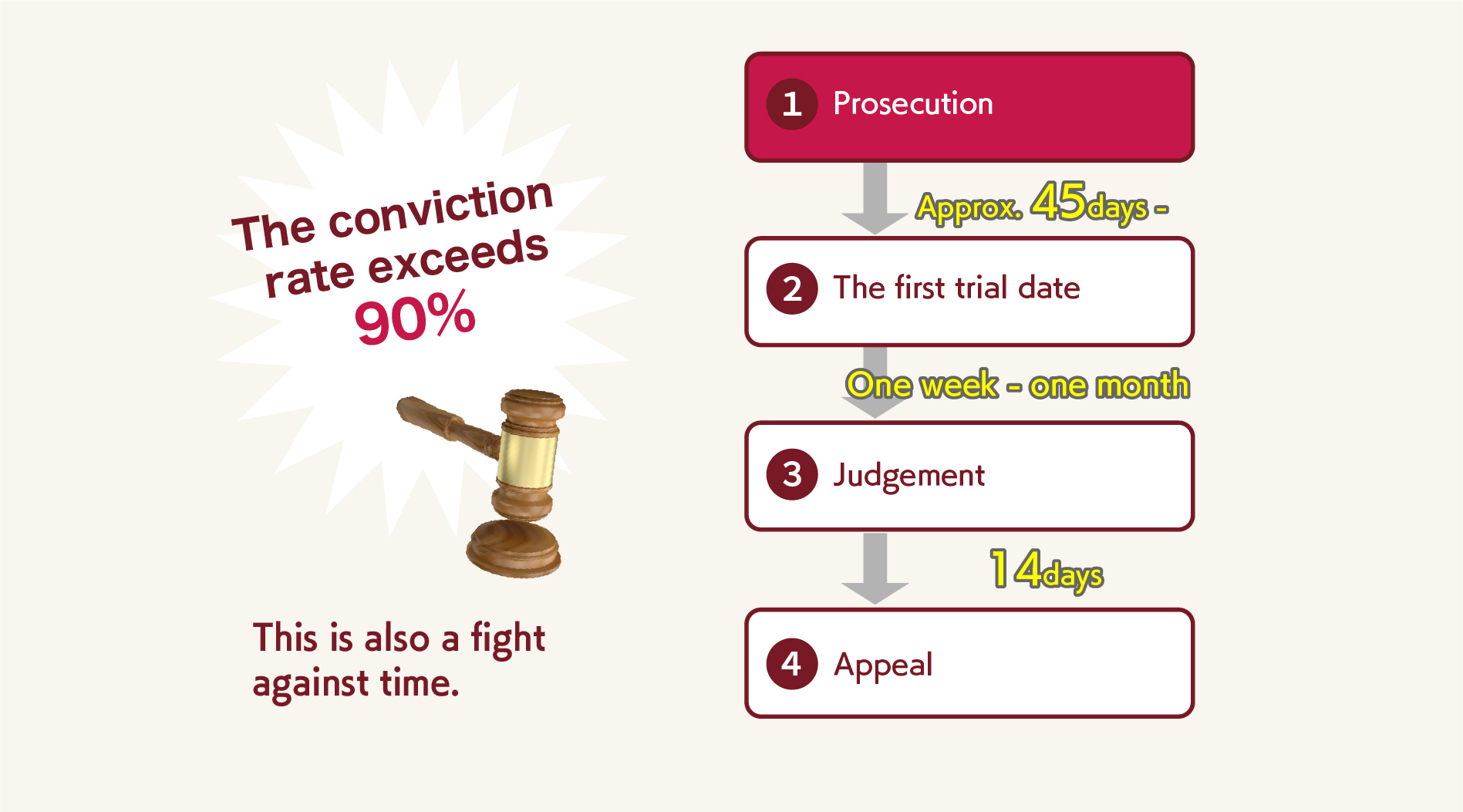 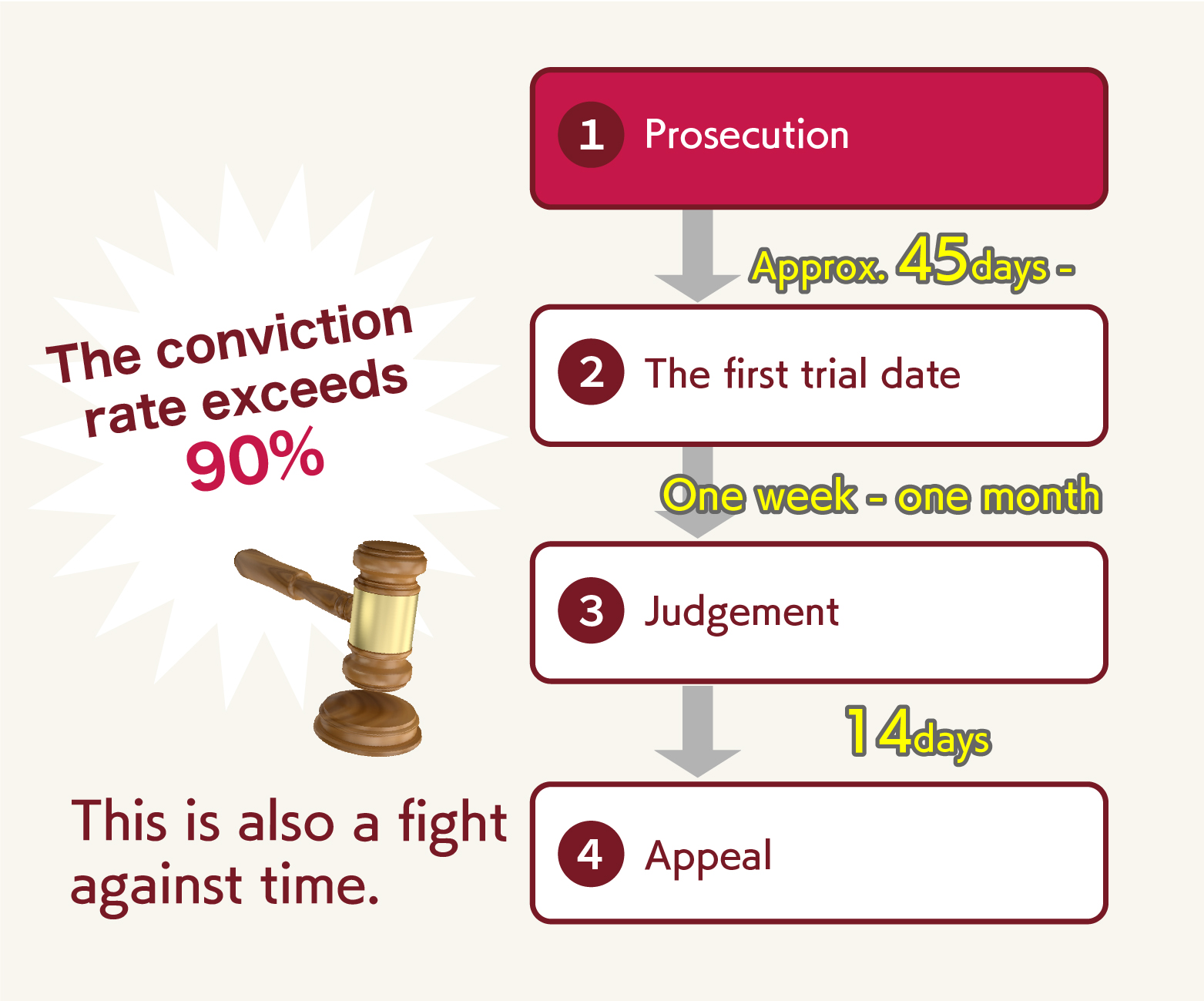 What an attorney can do:
If the accused is prosecuted immediately after the detention period without interruption, he/she will not be released until the day the judgement is rendered unless a bail request is approved.

Therefore, an attorney must request the approval of bail right after the indictment.
In addition, even submitting a bail request is a difficult process without an attorney’s support, especially when the accused is a foreigner.

2. Preparation for the trial

What an attorney can do:
An attorney confirms the evidence which the public prosecutor possesses, and prepares for the client’s defense at the trial.

According to the Code of Criminal Procedure, a counsel may not confirm the evidence held by the investigative agencies until the prosecution of the accused. As for the accused themselves, they are not allowed to do so even after prosecution.
Defense strategies for the trial, which are highly specific to each individual case, cannot be explored without counsel’s support.

What an attorney can do:
An attorney’s responsibilities at this stage include the examination of both witnesses and the accused, as well as the submission of documentary evidence that is advantageous to the accused. These are all crucial factors to obtain a ruling in favor of the accused.

Criminal procedures in Japan grant strong authority to the public prosecutor’s office. Therefore, a prosecutor’s claim can be easily accepted without an appropriate defense by an experienced counsel.
Given Japan’s conviction rate of over 90%, a rigorous defense must be fully executed to attain the desired outcome.

What an attorney can do:
An attorney prepares another request for bail or an application for appeal.

Obviously, the above action is unnecessary if the judgement resulted in a desirable ruling. However, if our claim was rejected at trial, the next step would be considering an appeal to the High Court.
In particular, if the accused receives a prison sentence while still on bail, he or she will be detained again on the same day. Therefore, another request for bail needs to be prepared at any time.

What an attorney can do:
An attorney submits a statement of the reasons for appeal.

Under Japanese criminal procedures, an appeal may be requested if the accused is dissatisfied with the first judgement.
One thing to note about the appeal system in Japan is that it rarely involves the re-examination of evidence. Namely, if the quality of the aforementioned statement is poor, an appeal request may well be dismissed.

The steps below outline our services.
If you have any questions, please contact us by telephone or using the online form!

1. Consultation by telephone or email

2. At the earliest, an interview will be conducted on the same day.

Speed is our priority!
If you reside overseas, we will provide you with an estimate by telephone or email.

3. Conclusion of a contract

If you visit our office, we will prepare all the necessary documents such as a contract and power of attorney on the spot. This will allow us to start handling your case immediately.
If you are located far from our office and unable to visit us, we will be able to offer alternative methods including conducting an interview prior to the conclusion of a contract or advancing the contract procedures by mail or email.

4. Providing the highest level of support for the settlement of the case

After the official conclusion of a contract, we will start defending your case.
Our activities will be frequently reported to you.
A contingency fee will be charged after the settlement of the case.

(1)A simple case where the suspect has confessed to the crime and the investigation is in progress without detention. (2）A case where the suspect is under detention
<a. During the investigation stage> <b. During the trial stage> An appeal case * We offer a consultation with a fee before concluding a contract, as a thorough review of various documentation is required to determine the prospect of an appeal.